Last month, Popeye Gallery made our official curatorial debut inside Survival Kit at 78th Street Studios. We’d like to extend our sincere thanks to the countless visitors who stopped into the gallery to support us and the artists.

After three years of “popping up” in various venues throughout the Waterloo Arts District, we are very excited to have finally found a semi-permanent home. Beginning last month, we will be curating regular exhibitions at Survival Kit at 78th Street Studios. The 1500 sq. ft. space is located on the third floor of Cleveland’s “Art Maze” (Suite 303)

Moving forward, the space will allow us to feature both more artists and larger work. We hope to also provide greater exposure to the artists and more impact to our community.

Local musician and Survival Kit co-founder Brian Straw will continue to use part of the space as a recording studio, and to present live music after 9 p.m. on Third Fridays. Local painter Justin Brennan is renting the studio space connected to the gallery.

Last month’s Popeye Presents Future Past featured new and recent work by Benji Diaz, Andy Dreamingwolf, Jamey Hart, Mike Lombardy and Meg Wilson. The show was designed as an introduction to who and what Popeye is – what we’ve done previously, and what we hope to do moving forward.

Benji Diaz graduated from Cleveland State University in 2014 (Graphic Design). While at CSU, he received a merit scholarship from the Art department from 2012-2014, and won both Best of Painting and Best of Printmaking at the CSU Student Art Show in 2015. Diaz works with a variety of media including painting, drawing, sculpture, printmaking and design. He designed the Popeye logo, all of our flyers and the logo for the Waterloo Sculpture Garden in Collinwood. We first exhibited Diaz’s work in the Native Annex on Waterloo in September 2013. It was our first solo exhibition as Popeye Gallery.

His work often recontextualizes pop culture imagery from Diaz’s childhood. The depictions are often wrinkled, with shriveled genitalia and uncharacteristic sexuality.  “The perspective of my work encompasses sexuality,” explains Diaz. “I visualize it in peculiar ways, but the representation is meant to foster open-mindedness.” 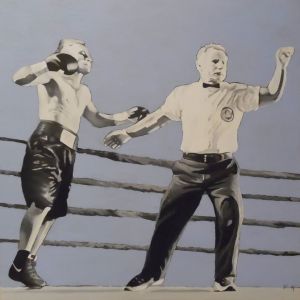 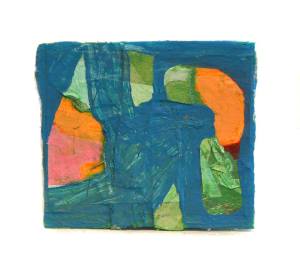 Jamey Hart is a recent graduate of Cleveland Institute of Art’s Creative Writing program. A poet as well, Hart’s mixed media assemblages have an enigmatic, primitive nature; balancing gritty surface qualities with color schemes evocative of modern and contemporary interior design. His technique of wrapping, or binding, his objects is reminiscent of African art. The final results are uniquely contemporary and uncharacteristic for such a young artist (Hart was born in 1992).

“I have been focused on small, relatively thin, paintings on paper and board in the studio lately,” reveals Hart. “I have become increasingly concerned with the way color gets embedded into the paper with my palms, or laid over top with a brush. The way it wraps the thing, defines or obliterates, seems important. Some narrative comes foggily into view, where certain shapes are repeated like a familiar ghost or some stupid hair in your memory. I think they are like Pop Tarts in the way they make me think of kid things. I want them to be right on the border of powerlessness but retain some strange honesty that keeps them bright.” 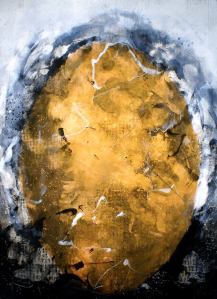 Mike Lombardy is also a recent graduate of Cleveland Institute of Art. Utilizing a variety of printmaking techniques, his abstract works captivate and evoke emotional reactions from his audience.

“I work through processes of printmaking in order reference the inherent mystery of our reality,” he explains. “The matrix I work through varies, however it is always used as a vehicle to express the hidden forces that shape our lives. As symbolic beings we have consistently tried to imagine, map, and name this elusive force. In medieval europe it was the metaphorical processes and diagrams of alchemists, in the eastern philosophies of taoism its recognition is an essential mode to daily life. As an artist in a heavily mass produced, mediated reality, I have found a void of this vital energy and a tension between the known and unknown. So accustomed to meaning, we refuse to accept that which we cannot understand. This idea formulates the basis for my work, I create symbols in which their​​meaning is just as elusive as what they represent. Structured from primal archetypal shapes, the symbols cut through our attachments to the known and strike a primal core within the viewer, allowing for a connection otherwise inhibited by our constant need to understand. From the moment I ink the matrix I am merely a channel in which this vital energy passes, allowing for an intimate experience with the material that is felt the moment the viewer engages with the work. The result is a balance between abstraction and organized mark making, cosmological mapping of our inner and outer space, disconnected from the weight of ideologies that shape our spiritual understanding of our world.” 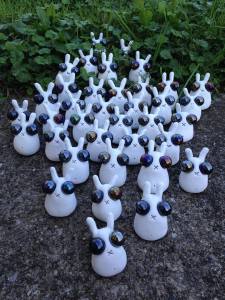 Meg Wilson also graduated from Cleveland Institute of Art (Illustration, ’08). She is the creator of BUNtitled, an online comic strip on Tumblr. She has made over 200 strips to date. New strips are published every Monday, Wednesday and Friday. The simplicity of these line drawings adds to their effectiveness.

She explains, “I use my abilities as an artist to stay grounded, to stay connected – no matter how disconnected I may feel. My work is my home base when I’m way out in left field.”

Each of these artists utilizes their media in unique ways. Despite these differences in their work, all of the artists were selected because of their skillful techniques, thoughtful concepts and dedication to their craft.

For this Third Friday (Friday, Oct. 16 from 5 to 9 p.m., live music at 9 p.m.), Popeye presents Assholes and Elbows, new work by the incomparable Dana Depew. For more information, please see our next blog post.